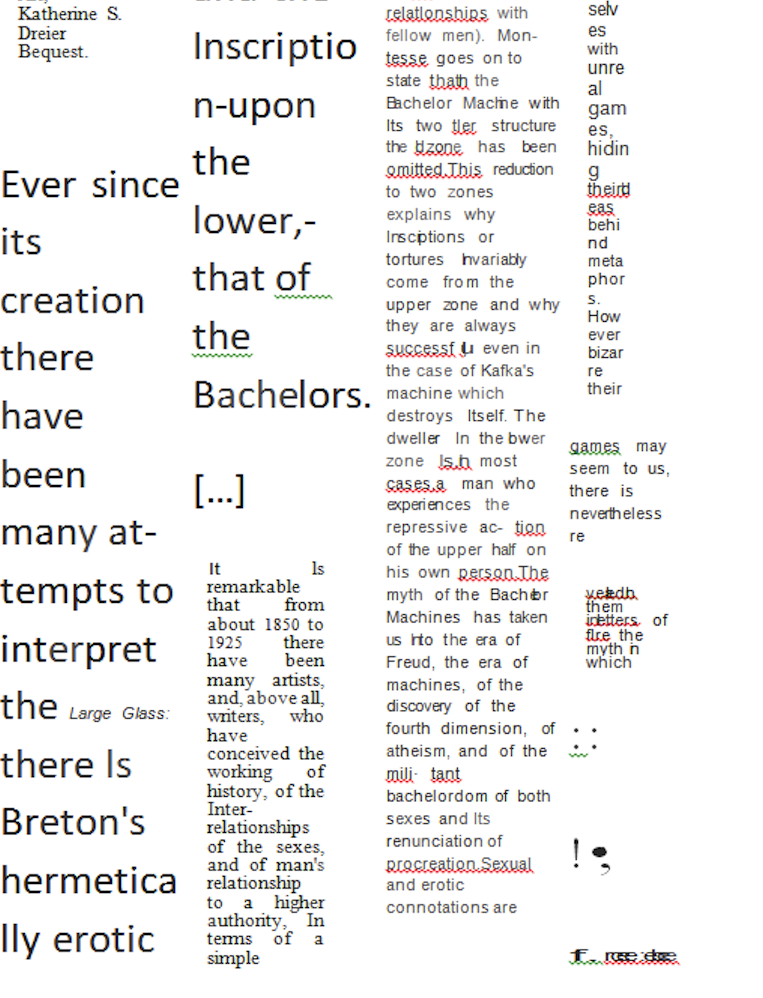 Coming from one of the countries where kinetic art was born – Italy – and where, as elsewhere, this trend has weakened over time, I was soon amazed at how much it is present in Swiss artistic production today.

This can perhaps be linked to various cultural characteristics of a truly unique nation, starting with its multilingualism. In Switzerland, language is not as binding as elsewhere.

Here we find the overcoming of language and the prevalence of vision. The metaphor and the ellipse replace the textual description. Heuristics replaces historiography and the rational sphere of téchne is used to achieve non-rational, phantasmagorical results.

This freedom from the rigidity determined by the writing of a concept in a single tetragonic language can be seen as a founding element of an important aspect of Swiss art, that is, the visionary nature, and I am not referring only to the taste for the grotesque that the Alps share (even in very different forms) with other territories, for example the Iberian Peninsula and Latin America. Here something else seems to emerge, especially in the temporal distance from the bachelor machines of Tinguely and other authors.

In Switzerland, many artists are tempted by the creation of new types of art objects, new formal domains. Works that seem to break free from categories and contents that are purely expressed. A land that has wanted to be self-determined since the end of the thirteenth century and that has reached very high levels of wealth perhaps allows us to imagine more the new, the different, the amazing.

Here young artists find rare opportunities elsewhere. Pro Helvetia has a leading role in this, fortunately followed by many other foundations, both private and public. The cantons and cities also carry out important tasks with their funds for contemporary art.

This makes it possible to use materials and technologies that are even expensive, to experiment with areas where art and science come together, in research that is fascinating and elsewhere rare. In fact, alongside works based on mechanical or electromechanical technologies, we can find productions that use what the most advanced technical development has originated. This is the case of many works that use the Arduino hardware/software platform (or his relative Genuino), but in Switzerland there are also authors capable of enhancing the energy of water or steam in the artistic field.

So we see individual paths of artists who – collectively – move along a double track: traditional or innovative technologies, often using both in the implementation of projects that still amaze the public.

It is not possible to respond unambiguously: there is considerable freedom for individual artists to approach this subject. However, it also seems important to me to point out the detachment it shows from the historical roots of international kinetic art. For example, there are relatively few works related to op, optical art. But some artists are fascinated by historical examples, I would say above all by Calder, rather than by the Swiss Tinguely.

I would also like to point out that the Duchamp term for bachelor machine – i.e. unproductive, useless – as a synonym for kinetic works of art does not always work here. Among the Swiss authors highlighted here, more than one makes complex machines capable of performing a concrete task, of being useful.

So I started out from Duchamp in this excursus and, through the interpretations of critics and thinkers such as Deleuze, Guattari and Carrouges, I try to hypothesize their overcoming, in this new millennium in which the relationship between man and technology is more than ever intense and pervasive. But I would like to take up the words of Harald Szeemann taken from The Bachelor Machines (original title: Les machines célibataires), the beautiful volume that illustrates the series of exhibitions curated by Harald Szeemann since 1975 in eight major European cities, starting with Bern and Venice, during the Art Biennale(1)
. 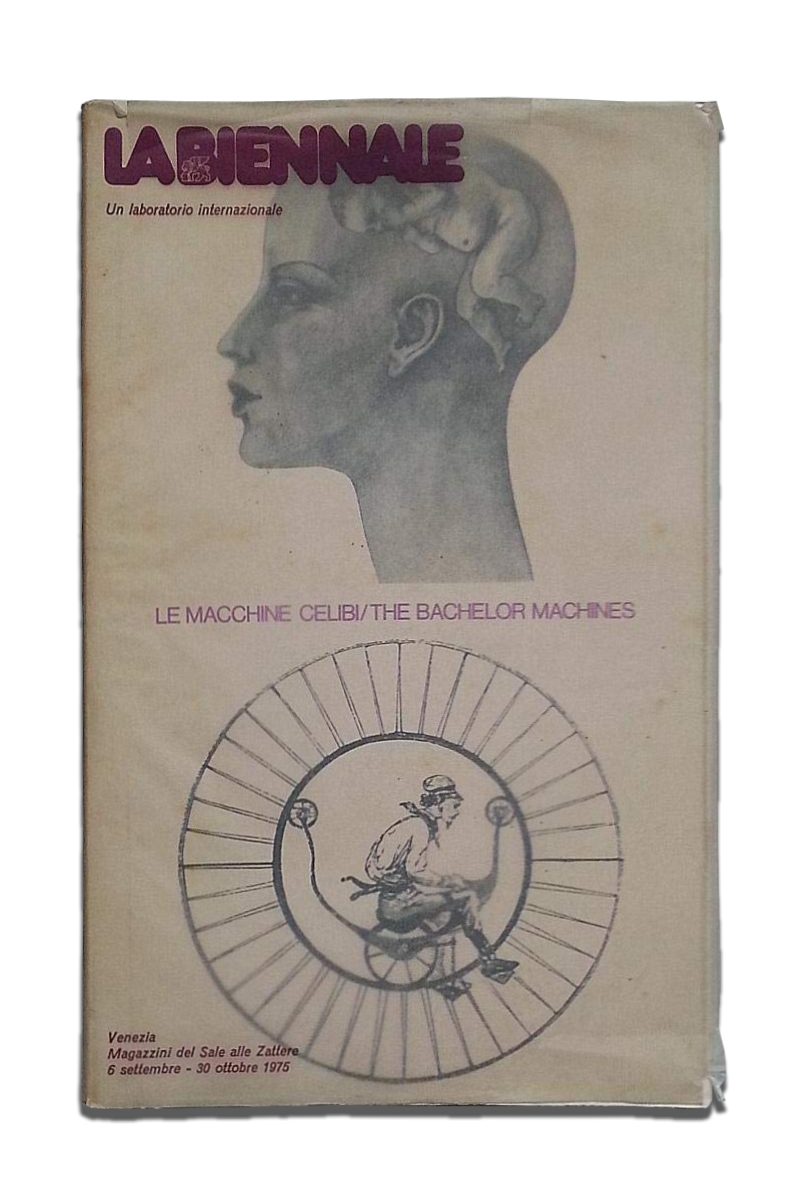 It is remarkable that from about 1850 to 1925 there have been many artists, and, above all, writers, who have conceived the working of history, of the interrelationships of the sexes, and of man’s relationship to a higher authority, in terms of a simple mechanical device. Freud himself has called the psyche an Apparat. It was the French writer Michel Carrouges who, shortly after the war, as the result of a dream, isolated the phenomenon, or rather the myth, of the Bachelor Machines. Starting out from a comparison of the Large Glass with the machine in Kafka’s In a Penal Colony, he noted that in both machines there is an upper zone with an inscription which passes on a message to a lower zone through a mechanical drawing device: in Kafka’s story the sentence is inscribed onto the condemned man’s back by means of a harrow. Alain Montesse makes an Interesting comparison of the structure of the Bachelor Machine with a person, whose personality, he states, is composed of three parts, the Id (storing place of inhibitions, libido reservoir, last bulwark of the will to live); the Super-Ego (place of parental influence, authoritarian commands and of social eligencies, time programmer and also control tower for the implementation of the programme); and the Ego (battlefield of Id and Super-Ego, place of encounters and relationships with fellow men). Montesse goes on to state that in the Bachelor Machine with its two-tier structure the Id-zone has been omitted. This reduction to two zones explains why inscriptions or tortures invariably come from the upper zone and why they are always successful, even in the case of Kafka’s machine which destroys itself. The dweller in the lower zone is, in most cases, a man who experiences the repressive action of the upper half on his own person. The myth of the Bachelor Machines has taken us into the era of Freud, the era of machines, of the discovery of the fourth dimension, of atheism, and of the militant bachelordom of both sexes and its renunciation of procreation. Sexual and erotic connotations are read into any invention of this period, while technical innovations are used as metaphors for a short-circuited cycle: thus Alfred Jarry uses the bicycle and the electric chair in Surmâle; Duchamp the bicycle, the coffee mill, the chocolate grinder, and his optical devices; Kafka the printing machine; Villiers de l’lsle Adam the android; and science fiction the computer and the rocket. Michel Carrouges ends his book with the following words: “It would be foolish to assume that the greatest geniuses of the early nineteenth century are busy amusing themselves with unreal games, hiding their ideas behind metaphors. However bizarre their games may seem to us, there is nevertheless revealed in them in letters of fire the myth in which the fourfold tragedy of our time becomes evident: the Gordian knot of interferences between mechanicism, terror, eroticism, religion, or atheism… (ln their splendid ambiguity the Bachelor Machines stand simultaneously for the omnipotence of eroticism and its negation, for death and immortality, for torture and Disneyland, for fall and resurrection… It seems to us that what becomes evident from the Bachelor Machines is the denial of woman and even more of procreation as a basic condition for a break with cosmic law-in the meaning which China and Kafka have given to this concept-and still more as a condition of enlightenment, freedom and magical immortality.” (Michel Carrouges: Les machines célibataires, Paris, 1954). […]

The “myth of the Bachelor Machines” was created at a time when it was still possible for renunciation of procreation to contain a concept of life by dint of a correspondingly sublimated geometry of eroticism, a time when it was possible to state something complex by means of a “simple” mechanical device; a time when a threedimensional Bachelor mechanism assumes an “adventurous, mostly female” fourth dimension as a relativization of view­points, in order to resist the temptation provided by once again surveyable circumstances with all the suffering they bring. Nostalgia (?) in the face of a creatively working generation whose reduction of the complex to the concise (word, sentence, form, image, gesture, closed circuit) is so exciting for us today in its justification through the experienced self-understanding of the reduction of the complex to the concise as a process. […]

Taken altogether, it is flaws like these, inherent in every product, which hinder the essential aim of the exhibition, the visualization of the anxieties, the Bachelors’ anxieties, of course, (does there actually exist such a thing as “serious”, that is to say iconoclastic, work, which does not originate from Bachelor activity?), in view of the hiatus between real and imagined living together with “the other”: man and wife, idea and life, nature and art, God and self, and belief and disbelief in the coupling of opposites. It is, surely, at this

point that one becomes aware of the achievement of the creators of Bachelor Machines towards realising the immense difficulty of accommodating the Mother, the Great Mother, formula and form, light heartedness and solemnity, In a closed circuit which, while considering everything, yet shrinks from allowing any one element to gain the upper hand. […]

Jarry defines God as follows: “God is the shortest distance between zero and infinity in either direction”, and his plane as “God is the tangent between zero and infinity”. Carrouges, in his Directions, operates with firm concepts and two areas with two corresponding elements. And all this in a museum which is not only a place but also an image and which occurs three times: as the place where the exhibition takes place; as Duchamp’s Suitcase Museum (Box in a valise) which, in scaled down form, contains within itself the starting point for the whole undertaking, the Large Glass; and as a sanatorium and agreeable machine used by the Bachelors (below) (the artists), invited by freedom (above), their pictures under their arms,- as in the painting by Henri Rousseau. It just so happens that energy can only be read from pictures which work with contrasts: one part is not the other part. A lack of elementary knowledge of philosophy will not stop people from philosophizing. A proverb speaks for and against, and for itself. It is difficult to live quite without a fetish.

(1) The Bachelor Machines, first published in Italy by Alfieri Edizioni d’Arte, Venice 1975. Published in the United States by Rizzoli International Publications lnc., New York. The publication of excerpts from the text by Harald Szeemann was allowed by Ingeborg Luescher, whom I thank with affection.

(2) In the original title is Grand Verre.